It comes as no surprise that Orlando’s Audubon Park neighborhood and nearby Winter Park often appear on food TV shows.

Both neighborhoods boast lush landscaping and lovingly maintained historic buildings. And, of course, both are home to top-tier restaurants. Every time a food TV program features a local restaurant, viewers are left dreaming of stunning scenery and amazing cuisine.

Here are four Orlando area restaurants you may have seen on television.

From 2013 to 2017, Emeril Lagasse traveled around Florida to explore the state’s ever-growing culinary scene. 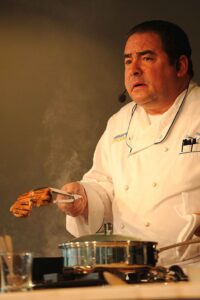 In episode one of Emeril’s Florida, the celebrity chef picked up an apron at the Ravenous Pig in Winter Park. There, he met chef James Petrakis, co-owner of the gastropub and brewery. The two cooked mouthwatering pan-seared and cured fish dishes together. Meanwhile, Petrakis described the restaurant’s commitment to using fresh, seasonal ingredients.

Because the Ravenous Pig uses locally sourced meat and produce, new masterpieces are added to the menu all the time.

The restaurant brews everything from rich porters to refreshing rice lagers. If beers are the main draw for you, consider having a seat in the modern beer garden. While unwinding outdoors, you can enjoy a variety of beers and a crowd-pleasing menu of upscale bar food.

In fall 2018, food critic Andrew Zimmern took a culinary tour of Orlando for his Travel Channel show The Zimmern List.

While there, he visited East End Market. Zimmern described the hip Audubon Park food hall as a “theme park for fantastic food.”

He started his day at Farm & Haus. Like the Ravenous Pig, this Orlando restaurant uses local ingredients to craft dishes rich in nutrients and flavor. Zimmern opted for a piece of avocado toast topped with fresh veggies and a farm-fresh egg.

Later in the day, Farm & Haus serves salads, wraps, and rice bowls that make for a delightful lunch or light dinner.

He first feasted on a platter of massive chicken wings. His next course consisted of spicy tonkatsu ramen with bone broth, pork belly, and tender noodles made in-house.

The restaurant’s Asian fusion flavors carry into its bar menu. Order a martini that pairs lychee syrup and boba with elderflower liqueur. Or travel the world with a New Japan cocktail, which blends Japanese whisky with French cognac and orgeat syrup.

In addition, DOMU serves expertly made mocktails that delight diners of all ages.

In the show’s final episode, he gets a taste of Portugal at Bem Bom. At the time, the business served Iberian sandwiches from a food truck that traveled around Orlando. Cunningham watched as chef Chico Mendonça prepared lamb burgers with freshly made feta compote and peri-peri sauce.

The juicy, flavorful burgers were a hit with Cunningham and Bem Bom’s customers.

In fact, the truck was such a hit that in 2018, Mendonça opened a brick-and-mortar spot in Audubon Park.

The restaurant’s large windows and ornate blue tilework give it a breezy, friendly feel. In addition to sandwiches on Portuguese prego rolls, Bem Bom has ventured into Mexican rice bowls and quesadillas. Round out your meal with a flavorful glass of Portuguese wine.

Orlando’s best restaurants have been on food TV so often, we couldn’t fit all our favorites into one blog.

Check out our guides to restaurants in:

As you embark on your Food TV tasting tour of Orlando, make Rosen Plaza your home base.

Our Orlando hotel is close to major highways, making it easy to reach Winter Park and Audubon Park’s delightful restaurants.

After you’ve savored the flavors these neighborhoods, keep your adventure going at our on-site restaurants. You’ll find everything from superb steak to fresh salads at Rosen Plaza. 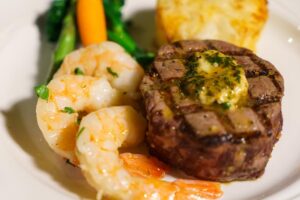 For more dining options, walk down International Drive for a meal at Pointe Orlando’s many restaurants.