The Fourth of July is right around the corner — do you have plans?

Make plans to see the great fireworks in Downtown Orlando, Kissimmee, Legoland, Walt Disney World, and Universal Studios Orlando. But that’s not all Orlando has to offer on July 4th. Independence Day is all about freedom, so celebrate your way at one of these amazing Orlando attractions.

The land was created to commemorate the American bicentennial. It features a replica of the Liberty Bell made from the same mold as the original and a 100-year-old oak tree reminiscent of the Liberty Tree that once stood in Boston.

This attention to authenticity carries over into the Hall of Presidents, which is the only place outside the White House authorized to use the presidential seal. The popular attraction is known for its animatronic figures of all the U.S. presidents, but it also features memorabilia from many of the country’s leaders.

Presidents Hall of Fame in Clermont

Magic Kingdom not on your itinerary? There’s another way to pay homage to the U.S. presidents.

Get a unique look into past presidential life at the Presidents Hall of Fame in downtown Clermont, Florida. See presidential china, first ladies’ gowns, historical documents, and campaign posters. This place, a decade older than Walt Disney World, gives the Hall of Presidents a run for business.

Aside from its own animatronics collection, the Presidents Hall of Fame is best known for its miniature version of the White House. The model even has working light fixtures, tiny televisions, and hand-crafted furniture.

The mini–White House and other on-site replicas were created by the museum’s founders, John and Jan Zweifel. The attraction is still owned by the Zweifel family today.

Another unique – and free – July 4th idea is on the shores of Lake Tohopekaliga in downtown Kissimmee. Here you’ll find the Monument of States. 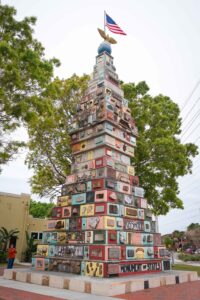 The structure is located right by Kissimmee Lakefront Park, whose picnic pavilions, playground, and stunning views of Lake Toho make it the perfect place for a Fourth of July cookout.

The Monument of States was dreamed up by Dr. Charles Bressler-Pettis, a WWI veteran and president of a local tourism organization. After the U.S. entered WWII, he wanted to create a symbol of American unity while also attracting visitors to his hometown.

The result was a colorful, 50-foot-tall pyramid, made of rocks and fossils from each of the then-48 states. President Franklin Delano Roosevelt personally contributed a stone from his estate in upstate New York.

Local volunteers banded together to construct the monument in 1943. Their names are etched into the sidewalk around the attraction.

Audubon Center for Birds of Prey

Help honor the U.S. by protecting one of its most iconic animals, the majestic bald eagle.

Meet rescued raptors while learning about ways to help them when you visit the Audubon Center for Birds of Prey in Maitland. After getting to know the center’s birds, you can even sponsor your favorite one through the Adopt-a-Raptor program.

The bald eagle is seen as a symbol of American strength and freedom. Like most of the country’s birds of prey, however, they’ve faced many environmental threats. The Audubon Center for Birds of Prey tracks eagle populations and rescues injured birds.

Even if you don’t adopt a raptor, know your admission helps this organization fulfill its mission to help Florida’s majestic birds of prey.

You can learn a lot about a place’s history through art. So, this Fourth of July, take some time to celebrate American artists and artisans.

The Charles Hosmer Morse Museum of American Art will offer free admission on July 4th. The museum boasts the world’s largest collection of Tiffany lamps, as well as an impressive array of pottery and paintings.

On previous Independence Days, the Morse has displayed all-American artifacts such as silverwork made by Paul Revere and baseballs signed by MLB greats.

The museum is in the heart of Winter Park, a northern suburb with stunning views and great restaurants.

Orlando on July 4th: Know Before You Go

Orlando’s theme parks are open on July 4th as well as most of the unique ideas above. Other Orlando area attractions may be closed, or have limited hours, on the federal holiday. We suggest confirming these attractions’ hours in case you’ll need to visit on July 3 or 5 instead.

After the sun has set and the fireworks have faded into the sky, head back to your luxurious guestroom at Rosen Plaza. Our hotel is located on International Drive close to major highways, giving you the freedom to explore Orlando this Independence Day.