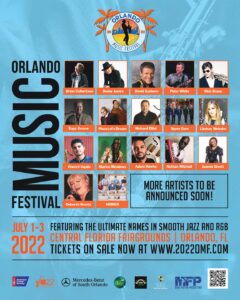 The inaugural Orlando Music Festival is coming to the Central Florida Fairgrounds from July 1-3, 2022. The fun-filled event will bring award-winning smooth jazz and R&B artists to Orlando.

Here are the exciting acts you can catch during the music-filled weekend.

On Saturday, six acts will take the stage. Highlights include jazz and R&B singer Lindsey Webster. In 2016, her debut single “Fool Me Once” reached the No. 1 spot on Billboard’s Smooth Jazz chart.

On Sunday, headliners The Jacksons and Ray Parker, Jr. will close out the festival.

The Jacksons are of the best-known acts in R&B history. They began their career in the 1960s as the Jackson 5, with Michael Jackson as the lead vocalist. The group enjoyed early success with songs such as “I Want You Back,” “I’ll Be There,” and “ABC.”

After Michael’s departure, they released the hit songs “Blame It On the Boogie,” “Shake Your Body (Down to the Ground),” and “Can You Feel It?” The band is currently composed of brothers Jackie, Tito, Jermaine, and Marlon.

While he’s largely known for his 1984 hit “Ghostbusters,” Ray Parker Jr. has had a long and notable R&B career. He has scored eight Top 40 hits in total. Other artists performing Sunday include Eric Darius, Spyro Gyra, and Deborah Krantz.

Gates for the rain-or-shine event open each day at 2 p.m. Performances start at 4 p.m. A three-day pass costs $150, and single-day tickets start at $65. Premium seating packages are available.

Stay Close to the Music at the Rosen Plaza