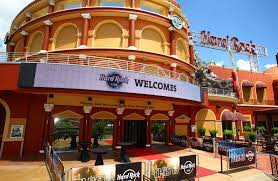 Located within Universal CityWalk, Hard Rock Live Orlando will host an incredible lineup of some of the world’s hottest performers in February 2023. Here’s who you can catch at the Universal Orlando Resort™ concert venue.

Death Cab for Cutie has been pumping out melodic hits like “I Will Follow You into the Dark” since 1997.

Led by frontman Ben Gibbard, Death Cab for Cutie is touring to promote their recent album Asphalt Meadows. The tour also marks the band’s 25th year as alt-rock mainstays. This is a show that indie rock fans won’t want to miss.

If you’re more of a blues fan, mark your calendar with this Orlando concert.

Singer, songwriter, and guitarist Kenny Wayne Shepherd is celebrating the 25th anniversary of his album Trouble Is… with a nationwide tour. The iconic blues artist and Grammy nominee will stop at Hard Rock Live Orlando on Friday, February 3, 2023.

Spanish rumba and flamenco musician Melendi began his varied career as a Formula One racer and soccer player. Eventually, he realized his true calling was songwriting and performing. Now, he pours his life experiences into his lyrics and songs.

Your Go-to Place to Stay in Orlando, Florida

If you’re planning a trip to Hard Rock Live Orlando this February, stay close to the action.

Reserve a luxurious yet affordable room at Rosen Plaza on International Drive. Our hotel provides clean, comfortable accommodations and amenities that won’t break your travel budget.