The day is a time to give what you can — be it time or money — to causes you care about.

It’s no coincidence that it comes a few days after the chaos of Black Friday. GivingTuesday is a chance to slow down and remember that the holidays are all about giving. And the day isn’t just for individuals. Companies worldwide use the day to boost their corporate social responsibility (CSR) work.

At Rosen Hotels & Resorts, we don’t limit giving to a single day. Rather, we embrace the spirit of GivingTuesday all year.

Here are four ways our company gives back on GivingTuesday and every day.

1.      We support community spaces in Orlando.

Harris Rosen, founder and COO of Rosen Hotels & Resorts, is an avid swimmer. He has swum at the same gym on International Drive for decades.

One day in 1992, he arrived for a dip in the pool. But a lending company had shuttered the facility. Mr. Rosen learned that the closure left local Special Olympians heartbroken and without a place to train. So, he took action, leading local fundraising efforts. The space became a YMCA.

Today, it is a thriving swim club known as the Rosen Aquatic & Fitness Center.

In 2009, Harris Rosen revitalized another community space, a nearby Jewish community center.

When the JCC needed a larger facility, Harris Rosen stepped in with a generous donation. Today, the Rosen JCC hosts a preschool, gym, after-school clubs, and camps.

The Rosen family turned their grief into action. And the Adam Michael Rosen (AMR) Foundation was born.

This nonprofit honors Adam’s legacy by aiding others battling the disease. Patients and their families can apply for help with living expenses. Harris Rosen has also raised funds for cancer research at UF Health, where Adam went for care. 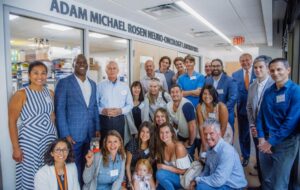 The AMR Foundation proudly works with local nonprofit Runway to Hope. Together, they plan well-attended fundraising events for childhood cancer.

They’ve raised as much as $1.5 million at a single event.

3.      We empower young people through education.

When he was growing up, Harris Rosen’s family stressed the value of education. This guidance led him to study at Cornell University. But Mr. Rosen realized that many children lacked access to quality schooling.

Children in the underserved Tangelo Park neighborhood can attend preschool for free. Upon graduating high school, they can also go to college at no cost. Today, nearly every child in Tangelo Park finishes high school. In the early ‘90s, the area’s dropout rate was almost 25%.

These programs gave Mr. Rosen a chance to engage students at his alma mater. Every spring break, Cornell students volunteer at the preschool.

Harris Rosen has also worked to foster the next generation of hospitality leaders. In 2004, UCF founded the Rosen College of Hospitality Management. Thanks to a donation from Mr. Rosen, the college could open its own campus near Orlando’s top attractions.

In 2022, the college was named the country’s best hospitality school and one of the best in the world.

At Rosen Hotels & Resorts, we believe that generosity knows no borders.

For decades, we have reached out to help international communities in need.

The Harris Rosen Foundation first sent school and medical supplies to Haiti in the 1990s. In 2005, the foundation helped raise funds for water filtration systems. They raised enough for 250 filters and distributed them across rural Haiti.

The foundation sent more supplies after the 2010 earthquake. In the aftermath of Hurricane Matthew, the organization helped rebuild homes in Haiti. 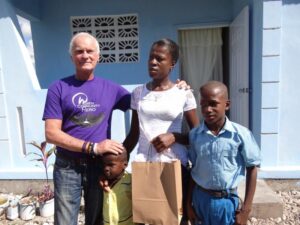 When an earthquake hit Japan in 2011, the Harris Rosen Foundation again got to work. The foundation worked with local students to raise over $86,000. This money was sent to the Tōhoku region and to Urayasu, one of Orlando’s sister cities.

In 2022, we again reached across oceans, this time in response to the crisis in Ukraine.

The AMR Foundation hosted Feeding Ukraine in May 2022. More than 600 people came out to support the World Central Kitchen. That August, Rosen Hotels co-sponsored a National Ballet of Ukraine performance.

Proceeds from the sold-out show went to nonprofits working to support Ukrainians.

GivingTuesday Every Day at Rosen Plaza

On GivingTuesday and all year, a stay at Rosen Plaza on International Drive helps us help others.

From the moment you check in, you’ll experience our world-class hospitality. Our Orlando hotel features spacious guestrooms and top-tier amenities. Our location makes it easy to get to the convention center and area attractions.

To read more about our CSR initiatives and how they align with GivingTuesday, visit Rosen Gives Back.