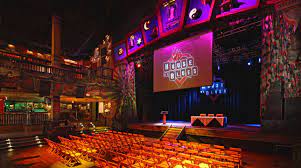 House of Blues (HOB) Orlando is one of Central Florida’s most popular venues. Every month, incredible acts roll through and bring the house down at the Disney Springs restaurant and concert hall.

Here are some of the exciting performances scheduled at HOB Orlando in February 2023.

Yuridia is one of the most iconic Mexican pop singers of the 2000s.

She first gained fame on the Mexican reality TV show La Academia. By the age of 19, Yuridia became one of the highest-selling Mexican artists of all time. Now, she is embarking on her “Pa’ Luego Es Tarde USA Tour.”

Experience the music of Yuridia at House of Blues Orlando on Saturday, February 11, 2023, at 8 p.m.

Morat’s band members have known each other since they were 5 years old, proving that good friends can create good music.

The Colombian folk-pop band’s international hits include “Mi Nuevo Vicio” with Paulina Rubio and “Yo Contigo, Tú Conmigo (The Gong Gong Song)” with Alvaro Soler. They are kicking off 2023 with a world tour to promote their fourth studio album, SI AYER FUERA HOY.

He has since released multi-platinum hits “Baby I Won’t,” “Dembow,” and “Swing.” Ocean has also collaborated with artists like Ed Sheeran, David Guetta, Karol G, and Coldplay. The versatile crooner’s most recent album, @dannocean, combines reggaeton, dance, and Latin-pop sounds.

Enjoy a Great Night of Rest at Rosen Plaza

After a fantastic night at House of Blues Orlando, rest and recover at Rosen Plaza on International Drive. Our hotel provides clean, comfortable, and affordable rooms close to Orlando’s top attractions.