The Dr. Phillips Center for the Performing Arts is set to host Steely Dan and Buddy Guy and John Hiatt in August 2022. These Grammy-winning and -nominated artists are sure to rock downtown Orlando.

Iconic jazz rockers Steely Dan will play two Dr. Phillips Center shows in summer 2022. On Monday, August 1, the act will play the 1977 album Aja in its entirety. The following night, they will “do it again,” playing every song from their live album Northeast Corridor. Both shows start at 8 p.m.

On both nights, you can expect to hear hit songs like “Peg” and “Black Cow” and deep cuts from the Steely Dan’s huge catalog. 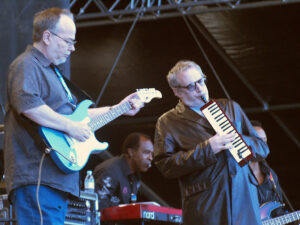 Donald Fagen and Walter Becker met in 1967 as students at Bard College in upstate New York.

The two bonded over their love of jazz and soul music and performed in various bands together. After graduation, the two tried to break into the music industry as songwriters. Producer Gary Katz liked the songs. But he thought their sarcastic lyrics and complex melodies were too out-there to give to another singer.

At Katz’s suggestion, Fagen and Becker decided to record the songs themselves.

Steely Dan’s first album, 1972’s Can’t Buy a Thrill, featured the hits “Do It Again” and “Reelin’ in the Years.” Katz produced this album plus follow-up releases like Pretzel Logic, Aja, and Gaucho. Between 1972 and 1980, the band released seven platinum albums.

The band has won three Grammy Awards and was inducted into the Rock & Roll Hall of Fame in 2001. Since Walter Becker’s Death in 2017, Donald Fagen has continued to tour under the Steely Dan name, backed by session musicians.

Both of Steely Dan’s August 2022 dates were rescheduled from October 2021.

If you bought tickets for the 10/12/21 show, they will be honored on August 1. Tickets purchased for 10/13/21 are good for August 2. Tickets for both nights are also available through the Dr. Phillips Center box office. They start at $76.

Singer and guitarist Buddy Guy is one of the biggest names in Chicago blues.

The 85-year-old legend has played a Fender Stratocaster for decades. His musical journey, however, started with a much simpler instrument. As a child in rural Louisiana, he taught himself how to play music on a two-stringed diddley bow that he made of wire and tin cans.

In the 1950s, Guy played guitar for various bands in Baton Rouge before moving to Chicago.

Through the 1950s and 1960s, he mainly worked as a session musician, playing guitar for Muddy Waters and Howlin’ Wolf. Guy’s solo releases from this time, which blended blues, rock, funk, and country music, did not chart. However, his energetic performances and unique sound impressed young artists like Eric Clapton, Jimi Hendrix, and Jimmy Page.

As this next generation of guitarists cited Guy as an influence, he began to gain mainstream recognition. 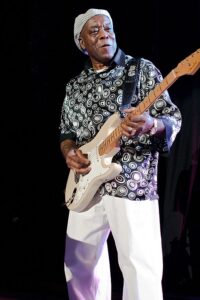 Since then, Guy has earned seven Grammys, a Kennedy Center Honor, and the most Blues Music Awards of any artist. In 2005, he was inducted into the Rock and Roll Hall of Fame by Clapton and B.B. King. In 2013, he enchanted yet another generation of music fans when he and Gary Clark Jr. released the song “Blues Don’t Care.” 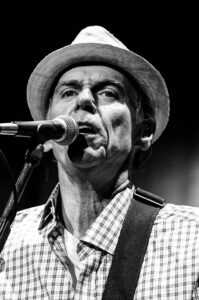 Like Buddy Guy, John Hiatt worked in the music industry for decades before finding commercial success.

John Hiatt grew up in Indiana. When he was 9 years old, his older brother and father died within months of each other. Hiatt turned to rock and blues music for comfort and began to play the guitar. He played the Indianapolis club circuit as a teen. After high school, Hiatt moved to Nashville.

Hiatt was soon hired as a professional songwriter. Yet he struggled to establish himself as a singer.

In 1974, Hiatt released his first album, the eclectic Hangin’ Around the Observatory. While the album did not sell well, Three Dog Night had a Top 40 hit with a cover of its track “Sure as I’m Sittin’ Here.” Hiatt fluctuated between country rock and new wave music for the next decade as he tried to find his place in the industry.

His big break would come in 1987 when his heartland rock album Bring the Family became his first release to chart on the Billboard Top 200.

John Hiatt will be joined at the Dr. Phillips Center by his longtime backing band, the Goners, featuring guitarist Sonny Landreth.

Legendary Amenities for a Legendary Night

After the music stops and the house lights come up, return to your luxurious guestroom at Rosen Plaza.

Our Orlando hotel’s serene décor and plush mattresses will help you unwind after an exciting night on the town. If you’re not ready for the night to end, head to Pointe Orlando. This world-class entertainment district is within walking distance of the hotel.